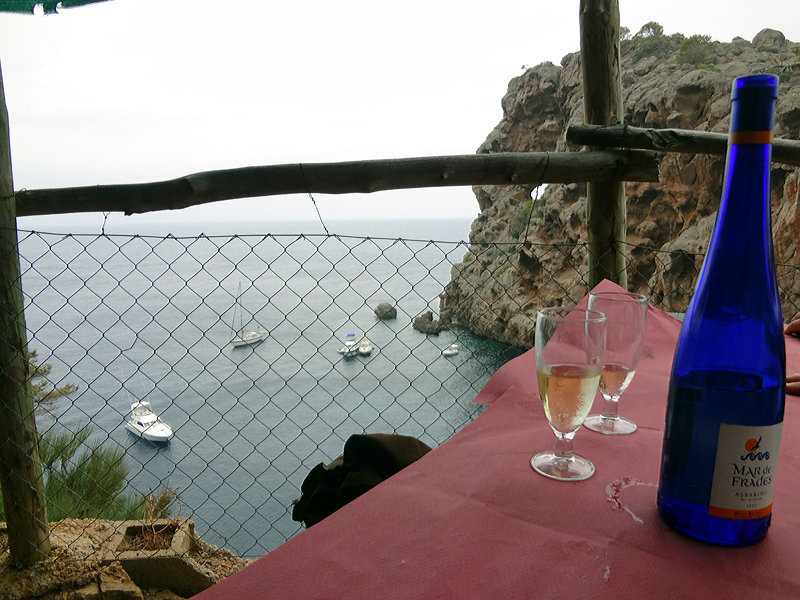 someday i will have to tell the story of restaurant Sa Foradada, which is only accessible by boat or by foot. in the meantime, if this just so happens to be information you desperately seek, i guess you can always e-mail me or something. 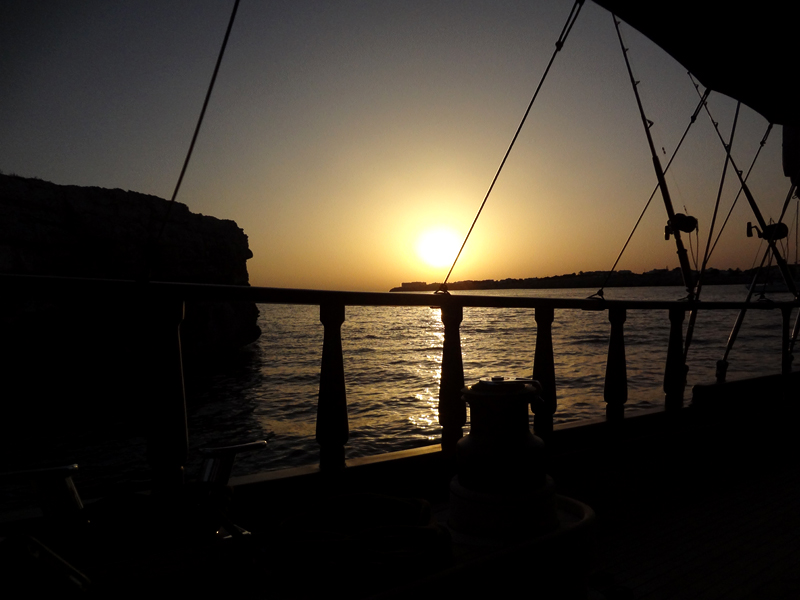 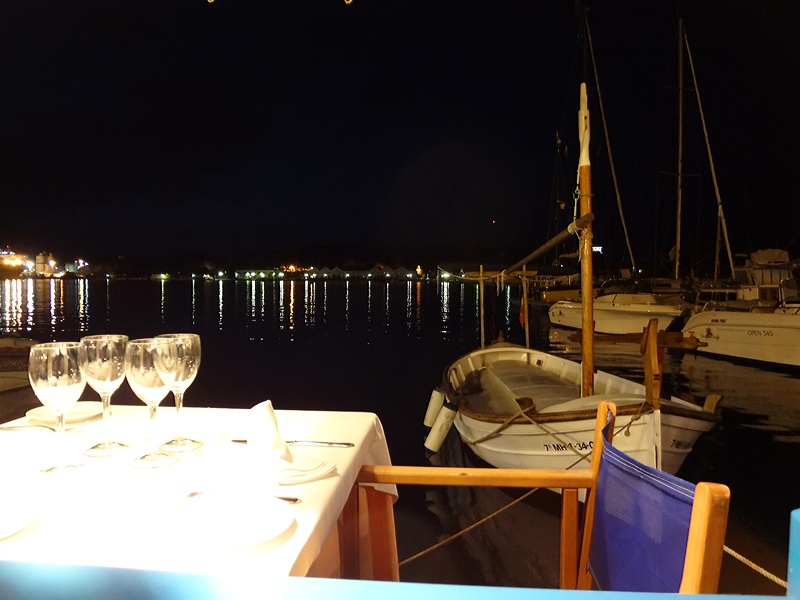 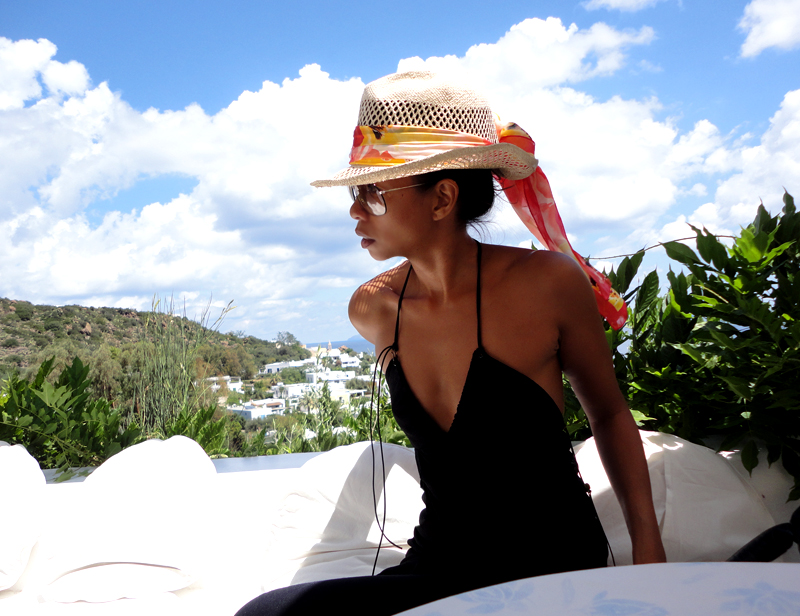 and another night in Panarea— which worked out really really great because Air Panarea turned out to be the very bestest way to get back to Lamezia Terme for our return flight to Milan.

sigh. bye bye Black Sea! thanks so much for everything. 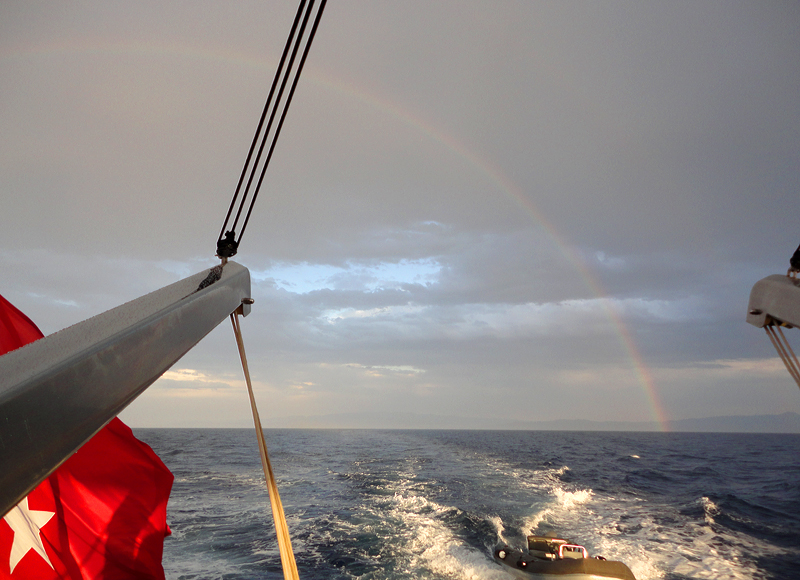 i want to tell the story of our friend who owns Black Sea but i’m not sure exactly how. cuz on the one hand, when something pretty significant happens, he will sometimes say to me (in his endearing sorta stunted Eastern European accent), "ah-beee… you this say me. you write, you write." but then on the other hand, when he had this particular decidedly awesome experience, he evidently told his wife, "mashallah… me no say for ennybuddy." which basically means he is trying to protect himself from the treacherous forces of the envious evil eye.

so of course that puts me in quite the conundrum– obviously, i want… this write, but then again i would absolutely hate to bear the responsibility of being the catalyst for insidious evil eye creepy-jeepies. so that’s why i won’t mention his name or show his photograph (or display the inside of his boat) without his explicit permission (in case you were wondering).

anyhoo! it just so happens our friend is obsessed with fishing, due in no small part, i’m sure, to being the (self-made bazillionaire) son of a humble fisherman. well, the day before as we were nearing the coast of Sicily, our friend spotted several industrial spada fishing boats which are known as "feluche." he immediately became obsessed with boarding one, despite our taxicab driver informing him these hefty perilous feluche were strictly for trade, operated by earnest lifelong fishermen, absolutely never ever ever open to tourism of any kind whatsoever.

naturally that didn’t stop our self-made bazillionaire son-of-a-fisherman friend. he promptly set forth inquiring of every Sicilian he encountered exactly how he might possibly go about spending some time aboard a felucca. everybody thought he was crazy obviously, until he finally charmed a jewelry shopkeeper in Taormina who agreed to make introductions. (the name of the shop, by the way? Lo Turco, but of course.) and this is how our friend infiltrated the shadowy intransigent world of spada feluche fishermen and embarked upon the felucca Simone.

to his much-deserved credit, he rose at 6AM (and traveled all the way to Messina by car) to join the ignoble fishermen on their arduous daily regimen, and Black Sea didn’t rescue him until 6:30PM that evening. to me, the most heartwarming part is how wondrous i imagine the spada feluche fishermen must have been to see Black Sea in all her resplendent magnificence as she arrived to retrieve her master, the son of a humble fisherman. they graciously bestowed upon her a monstrous laboriously-captured spada and refused to accept payment of any kind despite its unquestionable considerable worth. they wished their unexpected new friend buon viaggio, and we all lived happily ever after, The End.

then we saw our second rainbow of the trip. 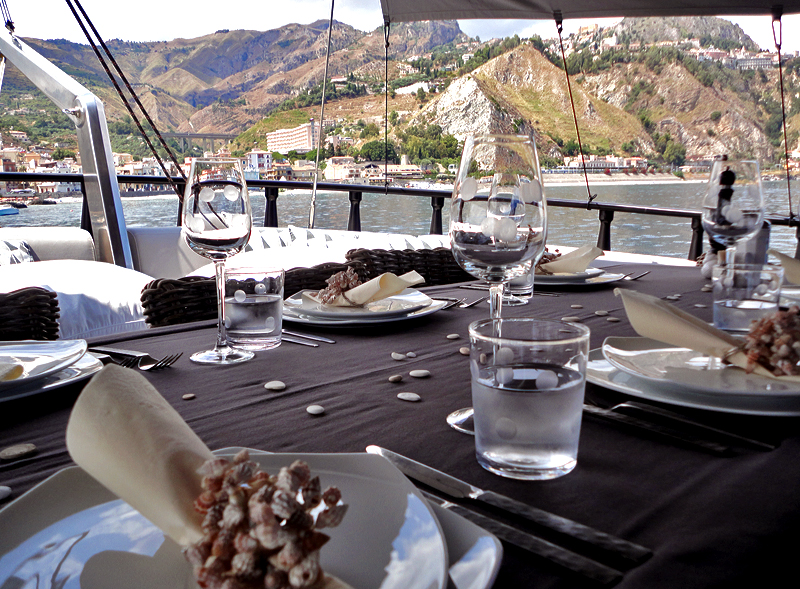 i’d already spent a full week in Taormina several years ago, otherwise i probably would have found this portion of the trip much more exciting. but as it was, despite Taormina being utterly beautiful, even on my first visit it already seemed a bit too touristy for me, so this time around it just sorta reminded me of The Venetian hotel in Las Vegas (hee ehee). but i must admit though, if you’re going to see a live concert performance, the ancient Greek theatre right next to the Hotel Grand Timeo must surely be the way to experience it (they host worldwide famous musicians all the time). so take that, Las Vegas.

anyway, having dined in so many Taormina restaurants on my last excursion, the very very very very fresh sashimi on Black Sea was undoubtedly a far superior meal. i forgot to mention Black Sea caught another big tuna off the coast of Lipari (so apparently we really did bring good luck after all)!

dinner at Il Paladino Taverna hosted by a very lovely couple we met in Taormina (more on that later). their 12 year old daughter was so adorable and friendly, even though she barely spoke Inglese she made a very big effort to engage us in conversation. she’s an aspiring fashion designer and she told me her "dream" is to come to New York and have breakfast at Starbucks just like Rachel Zoe. and she informed me much of the streets of Taormina are actually paved with "lava" from the nearby Mount Etna volcano. so then i was happy i’d bought a bracelet made out of lava rocks (from her parents’ shop) earlier in the evening.