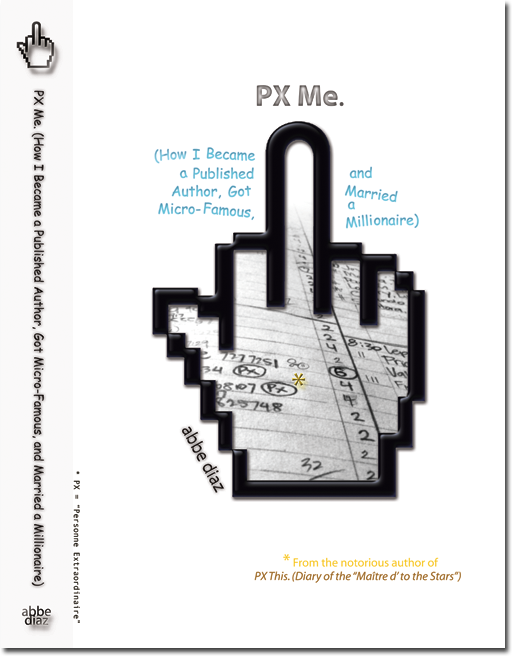 PX Me, by Abbe Diaz, is already raising some eyebrows— not the least of which belong to our own publicist, who just recently enlightened us:

“Your story is about ethical breaches endemic to some of the highest ranking names at the most-read news sites in one of the most mediacentric cities in the world — and the media isn’t going to touch it.“

Then why is the media trying so hard to squelch her latest book?

• The New York Post, New York magazine, Gawker, The Huffington Post, and Eater have all published misinformation and/or engaged in other unethical deeds of varying degrees on multiple accounts about Diaz, her work, and even her husband’s businesses.

• Mounting evidence also gravely suggests that in 2004, the (then) foremost New York Times restaurant columnist, the head editor of Gawker, and a New York Times photographer colluded to misappropriate the nonfictional story in Diaz’s first memoir in an apparent attempt to garner a “book deal” and/or “screen option” for themselves.

• Diaz has gone so far as to offer up to $10,000.00 for any established professional journalist to debunk her dire allegations against The New York Times and Gawker.

• Gawker owner Nick Denton forbade any writers from accepting her investigative-reportage challenge, under threat of termination and/or blacklist.

• The New York Times has been notified several times of Diaz’s allegations that they misappropriated her work and then falsified a similar essay. Despite The Times’s persistent advocacy of “transparency,” they have issued an unequivocal and hypocritical “no comment.”

• Some of the most prominent names in the media have explicitly evaded Diaz’s monetary offer for an objective investigative account and her assertions of blatant journalistic transgressions.

Hmm, what are they all so afraid of, we wonder. Read the book “the media won’t touch.”

** UPDATE: A New York Times staffer at the center of the controversy has engaged in cyber-harassment and death threats against author Abbe Diaz.. An Aggravated Harassment report has been filed with the New York Police Department. **

PX Me. (How I Became a Published Author, Got Micro-Famous, and Married a Millionaire)

When Abbe Diaz published her journal, PX This – Diary of the “Maître d’ to the Stars” [née Diary of the Potted Plant] in 2004, she’d had no idea what she was in for. Sure, she expected the process would be difficult and she might never work in the fine dining restaurant industry ever again, but she never imagined the truth could be so controversial— in a book that’s essentially about HAVING DINNER.

Despite PX This being lauded by most of her colleagues (and some of the most illustrious names in the business) as “the bible of the [NYC] industry,” Diaz soon learned the politics of Food and/or “Culture” Media & PR is a game that’s dirtier than last night’s dishes. Finding herself under unjustified fire from various vastly popular and influential news blogs, food press, online foodie communities, and other professional and aspiring writers, Diaz (a textbook Scorpio/Monkey) quickly realized [again] there were two things in her life she would never be willing to do: 1) Take unmerited bullshit, and 2) Kiss spiteful pretentious ass.

As you can probably imagine, that went over reeeally well. Mistruths, mudslinging, manipulation, misappropriation, corruption, censorship, and the tarnishing of her character— as well as the livelihoods of her friends and loved ones— are just some of the things she subsequently endured.

This is that diary.

** “This writing stuff is HARD.” – Salman Rushdie (to friends on Facebook®)

“If you think the writing is hard, wait ’til you try the selling part. Oh, wait…” – Abbe Diaz (in response to friend, Salman Rushdie, on Facebook®) **