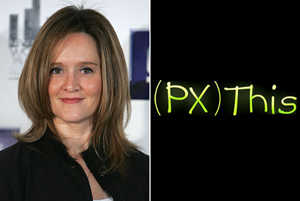 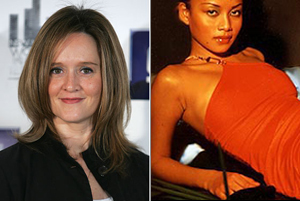 remember when New York magazine was the first to announce the coming of PX This? i kinda wonder why they decided to place a fucked-up PX This logo alongside Samantha Bee rather than the photograph of "me" (which was the only one circulating the Internets at the time). they made it look as though Sam Bee was involved with PX This, rather than Bee vs Diaz, which i’m pretty sure placing that picture above the passage is really supposed to depict.

Author WENDE (“Wendy”) DE LOS REYES sits at a display table, signing copies of her best-seller, PX This. She is a super-hot filipina, 32 (looks more like 22). The majority of autograph-seekers are fat baldies. A baldie approaches the desk and hands his book to Wende.

WENDE
(looking at book)
What’s this?

CUT TO: CLOSEUP OF OPEN BOOK

BACK TO MAIN ACTION

BALDIE
(raising an eyebrow)
All of the above?

WENDE
(writing in the book)
I’m adding a third option.

BALDIE
(high fiving another baldie behind him)
Oh yeah? What’s it say?

WENDE
(standing up)
It says "will you kick me square in my ignorant fucking nads."

In an exaggerated movement Wende checks the box then leaps across the table and does a spin kick right into Baldie’s nutsack.
WENDE’s MANAGER rushes over to intervene.

WENDE’S MANAGER
Enough. We have to go. We’re already late.

Wende tosses the book back to the wincing baldie then marches past the line of people, stopping to sock another baldie in the guts. This one is holding a rose.
Wende’s manager catches up.

WENDE’S MANAGER
These guys we’re meeting with today … they’re big time, okay.
They’re not going to stand for any of your bullshit. We need them.

A badass motorbike sits at a red light. Dressed in leather and wearing a fully enclosed helmet, the rider is indistinguishable. On green, the bike pops a wheelie and then zooms off.

BIG WHEELER
(into intercom as he climaxes)
Argghhhh. Send her in.

Wende and her manager enter the room. Big Wheeler stands to greet them, no sign that anything untoward has just taken place.

BIG WHEELER
Fucking nightmare. So, this is the famous Wende De Los Reyes?

Big Wheeler extends his hand for Wende to shake. Instead, Wende gives him her helmet. He puts the helmet on.

WENDE’S MANAGER
She’s going to make you rich, Dick. Did you read the book?

BIG WHEELER
I did. It’s fucking fabulous. Well, I didn’t read it
per se, but my assistant skimmed the first couple of pages
and she says with the right backing it could be
Doogie Howser meets Sex in the City. In a good way.

WENDE
Doogie fucking Howser? PX This is about the New York restaurant
scene, my diary from when I was maitre d’ to the world’s biggest stars.
And assholes like you.

Big Wheeler closes the shade on the motorbike helmet.

WENDE’S MANAGER
(Shooting a warning look to Wende)
She means that in a good way, Dick. Wende, tell him about the
time you walked in on Vinny Delpino going down on
Melissa Joan Hart in the coat closet.

WENDE
Okay. But it wasn’t Vinny Delpino. Or Melissa Joan
Hart. Or a coat closet.

WENDE V.O.
It was back when I was running shit at Murder Kitchen. I had to come in early
because, as usual, we were hiring and I was supposed to interview the new girl…