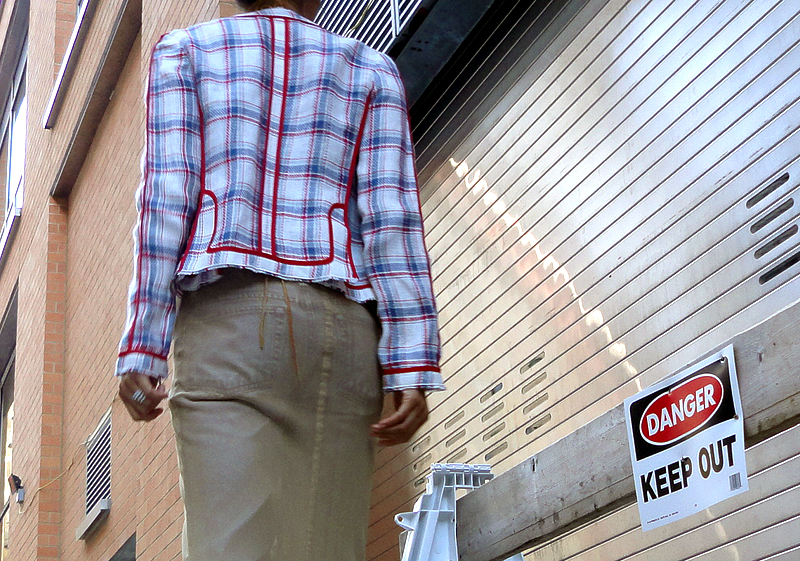 since we were in the area, we decided to take a walk over and check out the new Frank Gehry building near the Brooklyn Bridge. it’s pretty rad.

then we had an early dinner at Cercle Rouge and ended up right next to Pink. i didn’t notice her at first, she said to me "i really like your, whatever that is. dress?" and i replied "oh thank you." then she added "it’s beautiful, i love it," and i almost replied, "has anybody ever told you you look just like Pink?" ha ha ahaa, i am not even kidding.

see, i didn’t realize she’d recently had a baby, and so i wasn’t at all expecting Pink to be a bit healthier than usual and cradling an adorable blue-eyed little infant, much less engaging me in conversation at Cercle Rouge. and it’s true, we had a full-on discourse going at one point, so then when i finally realized it was indeed Pink after all, i felt funny bringing up how much sweetie loves her song, because it really seemed like she and her husband were rather enjoying their anonymity, having a nice quiet uneventful meal with their gorgeous little tot.

huh, there was a time i likely would have accosted her and offered to gladly make her a flesh mesh dress mess of her own to keep, but i just feel so busy and tired these days i can’t even. oh well, i overheard them discussing how they "just moved back" into town, so maybe i’ll run into her again someday. or ya know, when she decides to return to the rock star limelight, she’ll probably just tell her stylist to go out and have a flesh mesh dress made somewhere else, that’s usually how it works. so look for one on a future Pink album cover, coming soon.