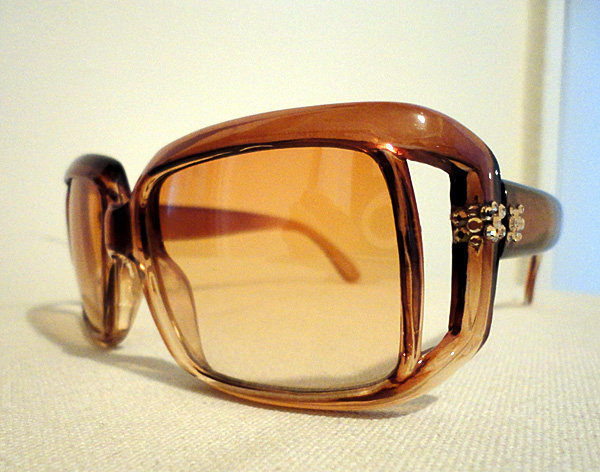 happened across these old pair of shades i bought years ago from a street vendor (for $6) just because i liked the tint of the lenses and frame (even though i already owned a good dozen pair of designer sunglasses). i’d brought them home and played with them, adding some spare rhinestones i had, to jazz them up a wee bit. so aha haa i decided to sport them for Fashion Week, as something of a fashion-lover/hater’s anti-Fashion statement. they’re kinda neat actually, they make everything glow this great golden hue, so it seems like the sun is shining even when it’s not. which is not a bad way to cheer yourself up, like light-therapy or something.

the thing about Fashion Week is you’re often obliged to go places and be fashionable even when you aren’t in the mood. and there’s lots of walking, because so much is crammed into one day and of course the taxicabs are scarce. don’t let the amateur fashionistas fool you—- during Fashion Week it’s really the comfy flat shoes that are your best friend.

i’m only showing a few photos from the shows, because you can see pictures like this everywhere (even in ads and whatnot). whenever other style bloggers i like post runway shots, i get irritated and bored— it’s always the bloggers’ own personal styles i find most intriguing. to me, these people make Anna Wintour— like, totally obsolete.